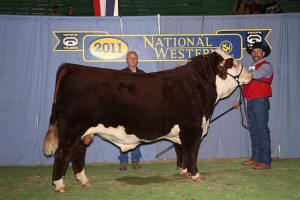 Warringa Herefords purchased the Australian semen and marketing rights in outstanding Canadian Poll Hereford Sire BBSF 101N Wrangler 29W. Bill and Minnie recently attended the World Hereford Conference held at Calgary, Canada. Following the conference they joined many other breeders from around the world and travelled to the East of Calgary through to Toronto. As part of the post conference tour they visited the Crittenden Brothers, GHC Herefords Stud, at Imperial, Saskatchwan. Their attention was drawn to the outstanding calves and maiden heifers by BBSF 101N Wrangler 29W. His progeny shone out like beacons in the Crittenden Brothers magnificent herd.

Wrangler produced for the Crittenden Brothers a young heifer which was shown at the 2011 Agribition Exhibition in Canada and was the high selling heifer at the Exhibition selling for $14,000.00. He has also bred well for the Brost family where his progeny were the high selling cattle at their 2012 sale.

Since the World Hereford Conference visit Wrangler’s genetics have been sought out from around the world.

Wrangler’s semen will be available for sale in 2013. Warringa Herefords will have semen for sale and will join Wrangler to their Storm, National, Rambo and Tom Thumb females.

Warringa Herefords are excited with the prospects and potential of this young sire and believe these new Poll Hereford genetics will add another dimension to their herd.